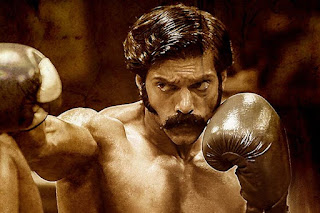 I like sports flicks even if they are not game – changers in that rousing genre. The Longest Yard, Remember the Titans, Rush, Dodgeball, the entire Rocky franchise and Creed are films I have watched more times than I care to remember. Million – Dollar Baby is one of my all-time fave films and it never fails to reduce me to a miserable puddle of tears. In short, I love sports films, unless they are made in India. Here people do weird things like cast Priyanka Chopra as Mary Kom, give Farhan Akhtar a chance to log in a whole lot of gym time to play Milkha Singh unconvincingly or whoever it was he played in Toofan, etc. Even the critically acclaimed Irudhi Suttru was a disappointment because I felt it was about a lot of things but the boxing itself which it was purportedly all about wound up somewhere at the bottom. Which is why Pa. Ranjith’s Sarpatta Parambarai was a refreshing change.

After the promise Ranjith showed with the excellent Madras, he went on to make the awful Kabali and Kaala which prompted me to set the bar really low for Sarpatta Parambarai but the film, while not lacking in the ideology he cares so much about and which yields mixed results cinematically speaking, treats the material with a certain dignity and has such innate respect for the sport of boxing, you can’t help but be charmed.

Set in the 1970s, against the backdrop of the emergency, Sarpatta Parambarai tells an oft told tale of an underdog, Kabilan (Arya), who rises from the dumps only to fall so that he can rise again. None of this is groundbreaking, but Ranjith can be counted upon to freshen this stuff up. It helps that Ranjith always opts to work with a powerhouse cast. Pasupathy, who plays coach Rangan is just pure dynamite! He conveys so much with his eyes and subtle use of body language, that it is impossible to take your eyes off him. The man is a study in understatement! John Vijay who is an Anglo – Indian father figure to Kabilan is excellent. The supporting cast of boxers - Santhosh Prathap as Raman, John Kokken as Vembuli and Shabeer Kallarakkal as Dancing Rose are so good, they easily eclipse Arya who is in his element in the training montages and inside the ring where he does a decent job of conveying intensity and aggression but in all the other scenes it is obvious that he is the lightweight among an impressive array of heavyweights. He is particularly horrendous in a scene where he has an emotional meltdown and wallows in self-pity. But the good thing about his character is that he is no saint, and despite his sins, you do root for him.

Kabilan’s journey is an impressive one although I found it hard to swallow that a rookie could take out pros in successive rounds with next to no training. Why do we keep showing this in our films? It doesn’t happen that way folks. Excellence in sports takes so much more than talent, aggression or inspiration. Boring things like endless training, hard work and dedication are called for. A couple of training montages before a big match is just not going to cut it. Just once, I would like to see a protagonist who lives, eats, sleeps, breathe his chosen sport allowing for no distractions. I doubt a project like that would be green – lit but I daresay it takes just that kind of maniacal commitment to achieve sporting glory!

Be that as it may, of course we have to talk about the caste as well as class divide that is always present felt in Ranjith’s films. There are characters like Thanigan (Vettai Muthukumar) who would prefer the likes of Kabilan to beg for alms in front of their homes, shovel up cow dung or slave for them but draw the line at him going on to represent and win for their Sarpattai clan. His devilry to stop the progress of Kabilan is reprehensible, unpalatable and in the climatic stretch, somewhat unconvincing. One wishes Ranjith would temper his passionate beliefs with just a touch of balanced perspective because ironically, while he has raised his voice against those who would trod upon the rights of lower caste members and blue – collar workers, he seems to endorse those boxing clans like ‘Sarpatta parambarai’, ‘Idiyappa parambarai’ etc. though it is almost a given that it must be a struggle for aspiring boxers to gain acceptance to these clans with the inordinate pride some of them take in their identity and their reluctance to let outsiders in. Sounds familiar? I have always wondered at the bias displayed by people who raise their voice against bias.

That aside, critics always rave about the ‘powerful’ women characters in Ranjith’s films but I beg to differ. Bakkiyam (Anupama Kumar) as Kabilan’s mum, Mariamma (Dushara Vijayan) his wife and even, Sanchana Natrajan who plays another character’s wife while solid performers are given nothing to do but scream and berate the men in their lives in an endless litany. The interminable shrieking is at the shrillest pitch possible and really grates on the nerves. It is commendable that these women make the men earn their respect, but I would have appreciated them more had they gone about it in a less hysterical manner. And I really wish, that a woman who repeatedly whacks her son with a broomstick isn’t applauded as ‘feisty’. Abuse is abuse whether it is a man or woman meting it out and I wish folks would stop treating it like a perfectly acceptable thing.

However, grouses notwithstanding, Sarpatta Parambarai has some beautiful moments. I loved that Dancing Rose berates his buddy’s less than honourable conduct while later bolstering the same fallen comrade by telling him that there is no shame in a loss if you have fought with honor and given the best you have got. I misted up at that. Incidentally, he is the only character who is a decent sport. Everyone else with their mulish clannishness including the hero would have done better to exalt the sport of boxing more than their petty rivalries.

Another aside worthy of a mention is when coach Rangan returns from jail and has a private moment with his wife, where they exchange a look of heart melting fondness though they are in the middle of a crowd… Ranjith does his best work when he brings out these small, intimate moments that establish the bonds shared by his characters and these triumph over the more epic stretches he stages though they are effective too. Ultimately, Sarpatta Parambarai may not quite deliver a knockout punch but it is definitely a helluva fight!

Posted by Anuja Chandramouli at 6:40 AM