A Charming Collection of Pure Unadulterated Brilliance: Ken Liu's THE PAPER MENAGERIE AND OTHER STORIES 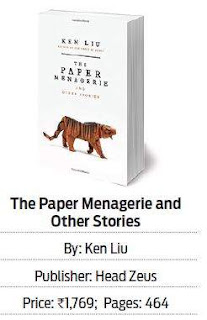 Ken Liu has an enviable author biography with a slew of major awards to his name and with good reason. He is scarily good at what he does, writing with confidence, vision and enough flair to swim in. In other words, those who care deeply about beautifully written stories would do well to grab 'The Paper Menagerie and Other Stories'. There simply isn't a dud in this magnificent collection of gems which can be enjoyed by the head as well as the heart.

These are stories that linger - deeply entertaining, educational, poignant and profound. Straggling the realms of science fiction and fantasy, while dipping into the sea of Asian mythology, legends and folklore, Ken Liu's work is suffused with the magical and mystical even when it is mired in the mundane. Irrespective of whether his tale is sci-fi at its most inventive like 'The Bookmaking Habits of Select Species' , 'The Waves' and 'An Advanced Readers' Picture Book of Comparitive Cognition' or a crime procedural featuring cybernetically enhanced law enforcers in 'The Regular', at its heart they are all intensely compelling narratives replete with colourful, flawed and endearing characters. This allows the reader to be willingly pulled into Liu's world where it is possible to float on tingling sensation buoyed with good, old - fashioned emotional heft.

It is hard to pick a favourite from this collection but it is easy to see why 'The Paper Menagerie' gets pride of place having been the only short story to win the Hugo, Nebula, and World Fantasy awards. As a child, Jack who is also the narrator finds himself having to deal with the fact that his American father had picked his Chinese mother out of a catalogue and the ramifications of this unconventional choice, which aren't pretty for a young boy in whose mind not fitting in is the equivalent of a death sentence. Driven by a terror of being stigmatized, he makes the irrevocable choice to reject his Chinese heritage, and in doing almost manages to destroy the things that are the most precious and magical in his life. This bittersweet story packs a wallop, dissecting the human heart and laying bare it's ability to love unconditionally as well as it's cruel capacity for rejecting even those who deserve better. It should come with a warning for this is soul searing stuff.


'Mono No Aware', truly deserving of its Hugo award is achingly beautiful, and to use the words of its hero, Hiroto feels like a kitten's tongue tickling the inside of my heart.
'All the Flavors' and 'The Litigation Master and the Monkey King' are particular favourites and thoroughly drool worthy. The former which is about the journey of the Chinese God of War in America is a  page - turner and finger - licking good. The latter like so many others in this collection will charm the pants off you and leave a lump in your throat.

'The Perfect Match',  'Simulacrum' and even 'Good Hunting' grapple with a very contemporary issue and explores humankind's scary willingness to be enslaved by technology. It is chilling, morbidly fascinating and all too relatable in today's world where most suffer from an incurable addiction to the gadgets in their lives.
At the onset Liu thanks the reader claiming that 'It is the possibility of our minds touching that makes writing a worthwhile endeavor at all.' This reviewer would like to thank him for making her so enamoured with this book, she would gladly marry it and have its babies.

An edited version of this review appeared in THE NEW INDIAN EXPRESS
Posted by Anuja Chandramouli at 9:35 PM 2 comments: