NAVARASA: Bolstered by some Brilliant Performances and Little Else

I like what the Bard wrote about mercy in The Merchant of Venice– “It is twice blessed: It blesseth him that gives and him that takes.” One of the nicest things about being human is the capacity for forgiveness, especially when it is extended to those who are deemed undeserving of it by a spiteful society. Bejoy Nambiar’s Edhiri tells the tale of Dheena, played by a superb Vijay Sethupathi who finds a vent for years of suppressed emotions in an unplanned act of violence and he is left broken to pieces by the crushing burden of remorse. Interestingly enough, the short focuses on Revathi’s character as well, who is directly affected by his actions and the climactic portion reveals that she too is traumatized by the albatross she bears around her neck.

The storyline is engaging and boasts some excellent performances from Sethupathi, Revathi and Prakash Raj and yet, it doesn’t add up to an entirely satisfying whole. The gradual unraveling of multiple layers of angst and agony feels a tad rushed, like the characters would have liked a little more room to breathe…

Priyadharshan’s Summer of 92 has the dubious distinction of being the worst of the lot. Based on an incident from Malayalam actor, Innocent Vareed Thekkethala’s life, it is supposed to be hilarious but it is anything but. Velusamy (Yogi Babu), a successful comedian returns to his native village, is feted in his school and delivers a speech that is supposed to inspire and tickle the funny bone. There are stinky poopy jokes, lame attempts to pass off cruelty to animals as humor, scribbling scandalous gossip on loo walls, and increasingly desperate attempts to make the viewer laugh. Needless to say, none of it works and you venture a tentative smile in relief only when the credits roll.

Project Agni reveals that director Karthick Naren is a huge fan of Christopher Nolan and his film is what you get, when you get your geek on and spend way too much time poring over the auteur’s work and fan fiction churned out in his honor. The result is a poor man’s Nolan film which is much ado about nothing in particular. Aravind Swamy is a genius type named Vishnu who calls his pal, Krishna (Prasanna) who is with ISRO to tell him about a major scientific breakthrough. Incidentally his assistant is named Kalki. Clearly no grey cells were severely taxed when these names were thought up and the same can be said about the script though there is a lot of talk about the ancient Sumerian civilization, aliens, the laws of time, conscious, subconscious, dream states, etc. It is supposed to come together with an explosive twist but it all fizzles out with a weak pop.

It is too bad because Arvind Swami and Prasanna are remarkable actors who elevate this material to a level of respectability it does not earn.

Vasanth’s entry is Payasam which is an interesting title since the sweet treat does not normally incite disgust or revulsion. So every time the camera zoomed in on the delicacy bubbling away even as guests who have arrived at a wedding are already drooling in anticipation as they wait for the festivities to be concluded so they can savor it, I expected someone to throw up into it…

It couldn’t have been the easiest rasa to work with but given that one of the characters portrayed by Aditi Balan is a widow who is looked at askance by some of the guests for her “inauspicious” presence at an auspicious event, one can be forgiven for thinking the film might zero in on the disgraceful treatment meted out to widows. However, the story places the spotlight on one man’s (Delhi Ganesh) jealousy over the good fortune of his nephew and his subsequent actions. It is a weird interpretation that never quite sits right.

Karthik Subburaj takes another stab at making a film about the Eezham conflict after the unmitigated disaster that was Jagame Thanthiram. This time around the results are much better though it is doubtful that a rebel would spend so much time waxing eloquent about the “mannu” they are fighting for. A small rebel faction with Master (Gautham Menon), Nilavan (Simha) and a couple of others are in the hot zone when a little boy crosses their path. He is determined to head into no man’s land in his quest to find his little brother Velaiyan.

It is a dangerous mission but Nilavan risks his life to help him. The twist here is touching and Subburaj should have left well enough alone. Instead he tacks on a climax that is supposed to tug your heartstrings but merely has you rolling your eyes.

Arvind Swami makes an impressive debut as a director with Rowthiram, which is the pick of the lot. Arul (Sreeraam) is an aspiring football player who lives with his down on her luck mum, Chitrama and sister, Anbu. In the opening stretch a bullying boor is attacked with vicious intent by Arul and the film tries to understand the boiling rage that drives this young man. Of all the films, in the anthology this is the one with the most emotional resonance. These are likeable characters who are doing all they possibly can with the wretchedness of their situation. I only wish that the actions of a desperate woman who is willing to do anything for her offspring had not been so harshly judged by the film or said offspring.

Young Sree Raam (you might remember him from Pasanga) does exceptional work here and deserves special mention for more than holding his own against a roster of towering talent.

Rathindran Prasad deserves credit for not taking the easy route to conventional horror in depicting Bhaya. Inmai is more ambitious in scope and gently explores the terrifying tendrils of fear that takes shape from guilt, trauma and monsters that lurk in the deepest caverns of memory. A moody, slow – burn of a short that has some truly rousing and effective moments.

Siddharth sinks his teeth into a meaty character and is in fine fettle. Parvathy is not bad but it is Ammu Abhirami (formerly seen in Asuran) who nearly steals the thunder with her electrifying performance and those evocative eyes.

After all the emotional wattage which prompts you to take a breather between the shorts, Thunindha Pin directed by Sarjun has some high voltage action against the backdrop of a magnificent forest. Vetri (the intense and immensely talented Atharva) is an idealistic rookie who is gung ho about finding himself in the middle of the fighting against the Naxalites. Needless to say he is in for a rude awakening. The conversation between the beleaguered soldier and his captive who refers to himself only as Comrade (Kishore) who is a kingpin among the Naxalites is interesting and Kishore is brilliant. But in terms of portraying conflicting ideologies and the men who are driven by their passionate beliefs the film falls hopelessly short of anything close to satisfying.

Contrary to what a lot of men seem to think, few women would take it as a compliment when an aspiring suitor constantly likens them to their mommas. I wish somebody would tell that to Gautam Vasudev Menon. And I would suggest he read Sophocles’ Oedipus Rex or Freud’s fascinating insights on boys who are fixated on their mothers. Romance is supposed to be his strength and there are a few surprisingly sweet moments here which harken back to his best work but overall this film is a misfire.

Suriya is miscast as a gifted musician who is all set to explode on the international stage. So is Prayaga Martin who plays his love interest, Nethra and simply cannot manage the reaction shots required to sustain a close – up. Karthik’s music with its riffs on Beethoven and Ilaiyaraja is charming but it does not quite manage the feat of conjuring the magic Harris Jayaraj’s did for GVM’s earlier work.

All in all, Mani Ratnam and Jayendra Panchapakesan’s Navarasa is not quite a delicious, nine – course repast but it does deserve props for effort directed towards a worthy cause and some memorable performances.

Posted by Anuja Chandramouli at 9:22 AM No comments:

Abolish the Curse that is Caste 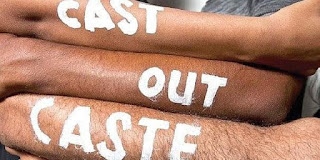 Not a day goes by when the news headlines fail to report something about the troubles associated with caste – based discrimination which has forced members of the lower castes to live in poverty, restricted to low – paying menial jobs that are considered undignified and unclean. In 1947, having won freedom from the white sahibs who incidentally considered all the brown chaps to be inferior without exception, India framed a brand new constitution which formally banned the practice of untouchability and other caste – related evils. It was a noble sentiment, even if it did next to no good.

Over seven decades later, not much has changed. The caste system compounded by the class divide remains a pernicious, malignant presence, tainting every single aspect of society. We read about atrocities committed against Dalits, shake our heads dispiritedly over something that happens with unfailing regularity, condemn such diabolical deeds on twitter every time the topic is trending while remarking in private that nothing is ever going to change because caste is too deeply entrenched in our country. Everybody knows a couple or two who married out of their own caste and talk about how their folks were cool about it, which points to a brighter future but even in the Puranic age, these things happened - the exceptions which never changed the status quo.

We must abolish the caste system if there is to be the faintest chance of our great - grandchildren not having to listen to holograms informing them that a Dalit woman was raped and murdered, while her protesting relatives were burnt alive to silence their screams. Again. To rip out such an ancient evil by the roots, we can start by doing away with the community certificate entirely, even if it is there for the ostensible purpose of doing the right thing by the downtrodden via affirmative action programs in educational institutions and the employment sector. The quota system doesn’t really seem to have helped the people it was supposed to. Rather, it has perpetuated the very evil it was designed to prevent.

By ensuring that the caste identity we cling to is eliminated, we may just manage to secure equal rights for all. Future generations will grow up not knowing or caring which caste their ancestors belonged to. And if we can provide quality education for all our youngsters especially the ones who can’t afford it, perhaps in the future, everyone will be guaranteed a fair share of the pie. Or payasam. An added bonus is that the politicians will no longer be able to manipulate the vote banks on the basis of caste. Isn’t that reason enough to burn up those community certificates immediately if not sooner?

Posted by Anuja Chandramouli at 9:16 AM No comments: