The Charming Chronicles of an Amoral Avian 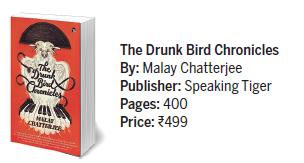 Malay Chatterjee’s ‘The Drunk Bird Chronicles’ is a strange book. Allegro Armstrong Braganza, the eponymous narrator literally gives the reader a bird’s eye view of a sprawling family saga spanning five generations and hundred years across at least three continents, featuring the oddest medley of colourful characters. The great white raven who is determinedly immortal was originally the friend and companion of Gareth Armstrong an inventor and brothel – owner turned missionary who leaves vice laden Victorian England for India, his beautiful daughter, Rachel in tow. Later, Allegro, becomes the guardian, friend and advisor of the many descendants of the Braganzas, a Goan family Rachel has married into.

Allegro is the anchor, and only constant in the lives of the assorted offspring and the folks who will impact their lives. Chatterjee is a spiffy storyteller and despite stiff competition offered by smartphones, Netflix, etc. manages to keep the reader thoroughly engrossed and entranced by the lives and fortunes of his vast array of characters. It is nothing short of a miracle in this day and age, when a book commands one’s sole attention given our willingness to be distracted by all and sundry.

It is hard not to be charmed by a narrator who insists on being drunk most of the time while also willing to share the benefit of his wisdom, experience and especially the sharp edge of his tongue. Allegro guides the reader across familiar pages of history and through the ups and downs of the tempestuous lives of the Armstrong – Braganza family. There is Emilio, the talented piano tuner and Rachel’s husband who is made to pay the devil’s due of four stitches in the arse to keep his tryst with an otherwise favourable destiny; Orlando and Blotto, the twins whose libidos threaten to derail their lives; Verna the nag, a Maharani who has been cast aside but continues to lord over all in her shrinking domain; the unfortunate maid, Marcelena who dares to dream of a better life; Marco the cop with the nebulous past; fiercely independent Laila who chooses to live and love on her own terms; Julio, whose life is marked by sordid deeds and beautiful art, brilliant Bella who studies to be a translator in Portugal and Maria, the dancer and struggling artiste.

There is wit, irreverence and compassion aplenty for the travails of these characters even as skeletons tumble out of the closet and tragedy as well as triumph wait around corners as these individuals trundle pell-mell across the landscape of their lives, reckless and filled with boundless ambition, hope, lust, longing and avarice. Even traditionally taboo topics such as incest, the question of consent when individuals are under the influence, the responsibility of a mother towards her child, sodomizing clergy, suicide, gang rape, are dealt with a surprisingly deft and light touch that nevertheless does not rob any of these touchy subjects of depth nor is any of it insensitive.

Instead by laying bare the secrets of so many lives lived so richly, fully and so replete with mistakes that are every bit as hilarious as they are heart-breaking, Chatterjee succeeds in spinning a thought – provoking saga that engages on many levels and leaves the reader thoroughly enchanted and asking for more when the last page has been savoured and turned.

This book review originally appeared in The New Indian Express.

Posted by Anuja Chandramouli at 9:00 AM 2 comments:

THE MESSY LEGEND OF THE MAMBA


Kobe Bryant (41), basketball legend died last month in a helicopter crash which also claimed the life of his daughter, Gianna (13) and seven other passengers. In the aftermath of this tragedy, there was a torrential outpouring of grief, love and affectionate tributes. Many basketball players, celebs and fans shared their favourite Kobe story, which were touching, funny and inspirational for the man was a giant and one of the all-time greats in his chosen sport. Kobe was cheered for his fanatical commitment, willingness to work harder than everyone else and undiminished love for the game to the very end. His daughter had showed promise as a basketball player too and Kobe had been coaching her team in addition to investing himself towards improving conditions in the WNBA. For this and more, he was revered and rightly so, but his legacy is not free of complications.

In 2003, Bryant was accused of sexual assault. The charges were later dropped when the victim refused to cooperate with the prosecutors. Bryant eventually settled out of court, the terms of which were never made public and he issued a public apology admitting that the victim had not considered their ‘encounter’ to be consensual. When this case was brought up amidst the glowing tributes, the backlash was immediate. A Washington Post reporter, Felicia Sonmez, who had tweeted the link to an article about the case, shortly after the news of his passing broke was suspended and then reinstated after massive public support in her favour. Anchor, Gayle King was buried under an avalanche of outrage, criticism, and death threats for bringing up the incident during the course of an interview. Actress Evan Rachel Wood was not spared either when she tweeted, “He was a sports hero. He was also a rapist. And all of these truths can exist simultaneously.”

All of this is proof if any is needed that conversation around sexual assault especially if dizzying levels of celebrity are involved are going to be polarizing and difficult. This is particularly true in the social media space where everything falls into binaries of good or bad, right or wrong and where everyone is expected to pick a side. But despite all this it is necessary to have these debates. We just need to focus on nuance and dial down the outrage considerably to prevent it from becoming a no holds barred fight unto death.

Many felt that Kobe Bryant had gotten away with a serious crime. That the loss of a few lucrative endorsements and his eviction from the jury at an animation festival in 2018 after a petition insisted on it in the wake of the #MeToo movement just did not cut it. His supporters however argued that he not be reduced to the sum of his worst deed, especially since in the intervening years he worked with his wife Vanessa to support various charities, address issues like homelessness and emerged as a champion to promote women’s sports. As always, people on either end of the spectrum make some valid points which deserve to be acknowledged. If we can do that without the ugliness of name – calling, trolling and threats to life and limb we can consider ourselves to be decent people who have done the right thing by a sexual assault survivor as well as a recently deceased, remarkable sportsman who also happened to be a flawed human being. And the last holds true for all of us. Which is why it is not our place to judge or condemn but to try and choose sensitivity and compassion over anger and hate.


This article was originally published in The New Indian Express.
Posted by Anuja Chandramouli at 8:54 AM 2 comments: