Celebrating Diwali without the Crap

There was a time when celebrating Diwali was simpler. It meant wearing new clothes, and sitting restlessly through pujas, the duration of which depended entirely on the austerity levels of the households one belonged to. The next step was listening to the tale of Narakasura’s violent life which came to an inevitably grisly conclusion at the hand of Krishna, which of course was the cause for centuries of celebration in honour of good triumphing over evil which in later years we cynically realized is history’s way of telling us that losers usually have their mistakes rubbed in their faces over and over again. Forever.
Then the fun and games would begin. We got to stuff ourselves silly with sweets most of which were supersaturated with sugar before being deep fried in ghee, bursting too many crackers with gay abandon, and rushing off to crowded theatres to catch the Diwali releases. Mostly though it was a day of glorious celebration suffused with an unalloyed joy that would rejuvenate our tired souls, filling us with renewed vigour for whatever lay ahead.
Whatever has happened to the wonderful sense of wellbeing that nothing but an old – fashioned celebration can provide? How come we no longer believe that evil will be vanquished and good will shine through? Why have we allowed our faith as well as the lustre of the festival of lights to dim?
Nowadays we see monsters everywhere and everyone is the enemy. Sugar and fat have both been declared as the real demons in a world where one of the greatest evils is love handles. Never mind that even science has decreed that a balanced diet means including everything in moderation. As for crackers, they are the devil’s toys contributing to pollution and must be avoided at all cost if you believe the celebs on social media who favour top of the line, high – priced gas guzzling automobiles  to get their bony behinds from one place to the other. Taking off to the theatres to forget our troubles over caramel popcorn and the turbulent drama in the lives of gorgeous people is no longer a relaxing pastime. Instead it is a political minefield where extremists flex their extortionist muscles forcing their hate – filled ideologies on us, effectively ruining the festive season. Enough is enough!


Let us get over ourselves already and recapture the essence of Diwali, the whole point of which is to brighten our lives by dispelling the darkness that resides within and without. It is time to light a fire under intolerant backsides everywhere and resolve to respect the choices of others even if that includes gorging on sweets to the point where they risk worms tearing out chunks of a chubby caboose, lighting up a few flower pots, chakras and colourful sparklers with friends and family or watching a film starring artistes from a neighbouring nation (gasp!). Finally let us celebrate a traditional holiday with all our hearts, spreading warmth and happiness around till everyone is infected with the same.

This article originally appeared in The New Indian Express
Posted by Anuja Chandramouli at 6:07 AM 2 comments:

Turkish writer, Burhan Sonmez’s Istanbul Istanbul is about four prisoners who are held without trial and tortured deep in the bowels of the city. Locked away in a windowless cell they are routinely dragged away along a narrow corridor, past an iron gate to where a world of endless torment awaits. When the guards see fit to return them to captivity more dead than alive they pick up the pieces of a broken body with the help of a marginally more resilient spirit and their cellmates to live out another day to the best of their abilities. A chilling detail is tossed in almost as an aside – in the cell opposite a woman is being held and her gender does not exclude her from the exact same brutal treatment meted out to the opposite sex.
Yet Istanbul Istanbul is about none of these things simply because it refuses to dwell at length on the torture, pain and suffering or the gritty, stomach turning nature of these characters’ misfortune and spares us the graphic details. Instead, the four men choose to distance themselves from the unspeakable horrors they are being forced to endure and wile away the time by telling each other stories, retreating further and deeper into an imaginary realm until the immediacy of their situation acquires dreamlike contours. The reader is drawn in as well and the effect is disembodied and disconcerting to say the least. 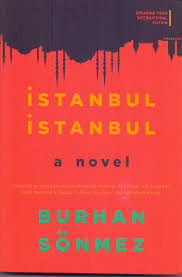 The stories themselves inspired by Boccaccio’s Decameron s are varied.  Some are naughty such as the tale of two nuns who discover a certain prosaic truth about exactly how fast a woman with her skirt up and a man with his pants down can run. Another involves fantastical man – eating wolves and some are downright bawdy including the one with a randy soldier and the sexcapade of a runaway Princess. These are funny, thought – provoking, bland or intensely philosophical.
One thing these stories are not however are revelatory of their narrator’s background or circumstances that led to their current predicament. Early on, the prisoners warn a newcomer not to reveal any incriminatory evidence or reveal telling details about himself. As veterans of ill treatment they are aware that nothing good can come from spilling their guts.
Despite the best efforts and extreme measures taken by their tormentors, the victims refuse to part with their secrets. The readers are treated roughly the same way. While allowed a free pass into the fantasies conjured by their coping mechanisms, the protagonists hold on to the  best part of themselves which is locked away deep inside leaving the onlookers out in the cold. Whether this is a good or bad thing depends entirely on personal perspective.