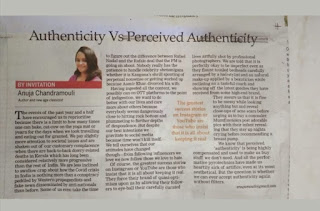 The events of the past year and a half have encouraged us to reprioritize because there is a limit to how many times one can bake, cat – cow on the yoga mat or yearn for the days when we took travelling and eating out for granted. We pay slightly more attention to societal issues and are shaken out of our customary complacence when there are back to back dowry – related deaths in Kerala which has long been considered relatively more progressive than the rest of India. We are less inclined to swallow crap about how the Covid crisis in India is nothing more than a conspiracy peddled by Western propagandists and fake news disseminated by anti – nationals than before. Some of us even take the time to figure out the difference between Rafael Nadal and the Rafale deal that the PM is going on about. Nobody really has the patience to handle celebrity shenanigans whether it is Kangana’s shrill spouting of perpetual nonsense or getting worked up because Aamir Khan divorced his wife.

Having ingested all the content, we possibly can on OTT platforms to the point of indigestion, we want to do better with our lives and care more about others because everybody seems dangerously close to hitting rock bottom and plummeting to further depths of despondence. But despite our best intentions we gravitate to social media because time won’t kill itself.  We tell ourselves that our attitudes have changed though – from following influencers we love we now follow those we love to hate.

Of course, the greatest success stories on Instagram or YouTube are those who insist that it is all about keeping it real. They force their brand of quasi – optimism upon us by allowing their followers to eye - ball their carefully curated lives artfully shot by professional photographers. We are told that it is perfectly okay to be imperfect even as they flaunt tousled bedheads carefully arranged by a hairstylist and au natural make – up applied by a beautician while reclining on a tasteful couch and showing off the latest goodies they have received from some high – end brand. They assure us that it is fine to be messy while looking anything but and reveal close – ups of acne scars before urging us to buy a concealer. Mumfluencers post adorable pics with their infant revealing that they stay up nights crying before recommending a breast pump.

We know that perceived ‘authenticity’ is being highly compensated and used to make us buy stuff we don’t need. And all the performative pyrotechnics has made us heartily sick of artifice, even at its most aesthetical. But the question is whether we can ever accept authenticity again without filters.

This column originally appeared in The New Indian Express.

Posted by Anuja Chandramouli at 9:02 PM