WHEN CIVIC SENSE WENT DOWN THE CRAPPER

I have a confession to make. While it is true that I can be mawkish when it comes to national identity, feel a personal sense of pride when Hima Das rocks on the track or Manoj Night Shyamlan makes a film that isn’t ripped to shreds by critics and even get teary eyed during the odd Independence day celebration, the fact remains that I am my country’s harshest critic. The sheer rudeness and uncouth conduct of brothers and sisters from other mothers and fathers can always be counted on to ruin my day.
All of us can admit to having been at the receiving end of shockingly uncouth behaviour from our countrymen. Nowadays, nobody believes it is nice to be nice. Forget offering a seat to the elderly in a crowded bus, old folks and pregnant women can count themselves lucky if they are not jostled, pushed or kicked out. All of us are litterers who have forgotten moral science lessons stressing that cleanliness is next to godliness but don’t hesitate to assault waiters who routinely serve us food mixed with the contents of their nostrils and dirt beneath their fingernails. The great majority of the public is guilty of being a public nuisance. Garbled ‘news’ reports widely disseminated across social media randomly point fingers accusing innocent folks of child trafficking or beef consumption resulting in them getting lynched.
In another shocking incident, a man died during a Kerala mall inauguration by popular star, Dulquer Salman and the police, denying reports that he was killed in a stampede have registered a case against the organizers for bad planning and crowd control. Somehow, one cannot help but think that this sort of thing is allowed to happen only in India. It is a matter of national shame that the average Indian is guilty of god-awful behaviour, has zero civic sense and cares less than nothing for the lives of those who don’t have anything to do with him or her. We are the sort of people who hawk, spit, relieve ourselves in public, swear at and mow down folks on the road, treat any place outside our home as a trash receptacle, dry hump the mildly protesting if resigned person ahead of us in the queue and allow our kids to run wild in restaurants and public transportation while cussing out the government for allowing this deplorable state of affairs to continue. Pointing out that the PM failed to make Swach Bharat a reality with the aid of droll memes is hilarious but hardly helpful.
Of course, our government needs to get its pants on and get cracking on a dozen different things to make this country a better place, but the responsibility rests with us, the honourable citizens as well. We need to not only start showing a modicum of civic sense ourselves but ingrain this priceless commodity in our children too. What is the point of waxing eloquent about the neatness of the Japanese or the lovely folks in the USA who not only refrain from pooping in public but pick up their dog’s poo as well, if we are not going to bother to emulate the same decent behaviour? It is high time we cleaned up our act and begin cleaning up after ourselves. Perhaps then we really will have a shot at making India incredible.

Posted by Anuja Chandramouli at 12:25 AM No comments:

On why Bad News is not Good for you

Nowadays reading the news disseminated via newspapers or smartphones is an excruciating experience. Going by the dire headlines, op – eds, hashtags and whatsapp forwards, we can expect nothing short of chaos, pandemics, wars, industrial collapse, global warming and assorted crisis situations of apocalyptic proportions within the next few days, if not sooner. Therefore, those of us who read about the supposedly tragic happenings of a foredoomed world, are convinced we will all end up being raped, robbed, murdered or worse.
Even if such perils were to be successfully sidestepped there is still a veritable field of landmines to be traversed with nary a hope of safety. Odds are still high that one can fall victim to a nuclear holocaust given that all the governments in the world are busy stockpiling weapons of mass destruction or become a flesh – eating zombie from the biological weapons that are being perfected. Let us not forget that environmentalists insist that the planet is past its sell by date and we are all on borrowed time. Then there are the human traffickers, Pablo Escobar wannabe drug dealers and illegal organ harvesters lurking in the shadows. If Hollywood is to be believed, (apparently the glam merchants have hired everybody who can write worth a damn since newspapers and journalists have become obsolete replaced by kids wielding smartphones and bloggers/ vloggers) all the monsters from our nightmares are alive, well and baying for  blood. 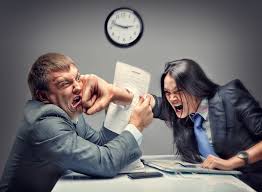 Not surprisingly, fed on a steady diet of negative news, a pall of gloom and doom has descended upon all those who feel the need to be well informed as opposed to the smarter portion of the populace who are too busy playing Candy Crush, indulging the narcissist within by pouting and clicking endless selfies, watching cricket or stalking their favourite celebrity on Instagram without giving a crap about how the rest of the world is faring. Consequently, irrespective of whether the world is a truly terrible place or not, we firmly believe it to be so and are fully convinced it is getting worse by the second. In this cognitive state, reality itself is likely to become shaded by our jaded view of it.

How did this happen? When did we become such negative Nellies? Perhaps the answer lies in the fact that though we would never admit it, unique as we mistakenly believe ourselves to be, our opinions are shaped by the opinions of others, most notably by those we follow relentlessly across social media platforms. Which is why it is not surprising, that the overwhelmingly pessimistic news content has spread like a contagion and distorted our perception of an admittedly flawed but beautiful world. The rose tinted glasses we favoured back when we were clear – eyed kids has been replaced with cynical shades and a morose outlook.
By magnifying the nature of the threats confronting us, we have misled our head and heart into thinking we are under siege and act accordingly. Having preparing the soil to nurture nothing but despair and turmoil, we have weeded out hope and faith. Perhaps this is the great catastrophe of earth shattering dimensions.
This article originally appeared in The New Indian Express.

Posted by Anuja Chandramouli at 8:08 PM No comments:

Mughal Roses minus the Thorns

Ira Mukhoty’s Daughters of the Sun is so engrossing, one is filled with resentment, every time the demands of real life intrude and yank the reader back from a glorious past that has been recreated with exquisite craft. Much has been written about the mighty Mughals but their women have been ignored to the point of criminal negligence. Mukhoty seeks to redress this by writing about revered matriarchs and sisters, cherished unwed daughters, talented wives and wily milk mothers. Characters like the remarkable Khanzada Begum who was the rock that had the backs of both Babur and Humayun, Gulbadan Begum, who honoured Akbar’s personal request to write about her royal father and brother, Maham Anaga, Akbar’s milk mother, the often unfairly maligned Noor Jahan, and Jahanara, Shah Jahan’s daughter and the woman Aurangzeb respected the most, grace these pages and their lives are constructed with painstaking attention to detail. Mukhoty’s mission is to strip away faulty perceptions about life in a Mughal harem perpetuated through the critical gaze of Westerners and she is mostly successful. The general assumption is that women languished within a cloistered space in the zenana, frittering the years away in misery softened only by opulence. Many mistakenly believe that these ladies when not engaged in sexual excess or popping out babies, spent the time scheming to make their sad existence count. Anxious to set the record straight, Mukhoty paints a version of these forgotten women that portrays them as highly educated, cultured, confident go – getters whose talents were nurtured and prized. These were no wilting lilies left to languish in languor but hardy women who rode with their men into battle, covered great distances across dangerous terrain, delivered babies while in exile, proved themselves to be expert entrepreneurs and administrators, patrons of art, and builders amongst other things. Proud of their Timurid heritage, the Mughal women were visionaries who bolstered the resolve of their menfolk and helped shape an empire that was worthy of their illustrious bloodline.
However, in her zeal to set right a skewed perspective, Mukhoty overdoes it a tad. Choosing to dwell solely on the achievements and positive attributes of the royal ladies, she glosses over intrigues, petty jealousies and downright villainy that was certainly displayed. A particularly revolting incident involves Maham Anaga ordering the deaths of two girls coveted and captured by her son, for fear of their revealing his dangerous machinations against Akbar because ‘a severed head makes no sound’. The author seems content to give this character a pass merely rueing the fact that she was ruined by the actions of the men in her life. Noor Jahan gets similar treatment in order to show her in a sympathetic light. Surely women need not have their warts and blemishes concealed in order to earn our admiration?
This flaw notwithstanding, Mukhoty in choosing to champion the best of the Mughals, who did not deserve the shabby treatment meted out to them by history, has achieved something amazing and deserves to be championed too!
This book review originally appeared in The New Indian Express.

Posted by Anuja Chandramouli at 7:55 PM No comments: