Vegetarianism is not Synonymous with Virtue

I have nothing against vegetarians. A lot of them are friends who invite me home for meals where I cheerfully stuff my face with pulao (just don’t call it veg. biriyani), stuffed chapathis, papads, gobi manchurian and carrot halwa.  When I return the favour, they are content to tuck into my veggie fried rice, chilli paneer, mushroom au gratin and chocolate fudge without gagging at the sight of the non – vegetarian spread. More importantly, they have never judged me for my carnivorous ways nor, I them their culinary choices since these have their roots in culture, tradition, religion or personal preference. That ought to be that, but unfortunately it isn’t.

In recent times, many from the growing ranks of vegetarians who may prefer terms like vegan, lacto vegetarian, ovo vegetarian, pollotarian, pescatarian or flexitarian have taken a militant stand against eaters of meat seemingly determined to convert those they believe don’t know better with missionary zeal and extreme shaming tactics. Herbivores seek to condemn and criticize those who are partial to their deluxe bacon burgers and mutton biriyani or simply cannot pay the criminal prices charged for kale, aubergine, quinoa and salads made with 75 environment friendly ingredients. Surely that is obscene in a land where too many are unable to afford one square meal let alone an expensive, organically sourced vegan one? If a fattened goat feeds a family for a week why begrudge anybody that?
Almost as bad is the attempt to impose cardinal culinary principles on others by those who are sanguine in the mistaken belief that vegetarianism is synonymous with virtue which makes them morally superior beings and the offspring of dharma and ahimsa. When those of the phytophagous variety (foes of flora, I like to call them), insist that it is not possible for those who can’t do without roasted chicken to love or care for animals, that those who feed their children meat are guilty of abuse (never mind that courts in various parts of the world have pulled up parents who forced their dietary ‘principles’ on their children with the result that they wound up malnourished) and meat eaters are destroying the planet, the overblown rhetoric stripped of nuance leaves me convinced that all this is little more than superficial posturing and hollow outraging, designed to dictate what others eat and police personal menus.
Studies by Nicoletta Pellegrini have shown that while consumption of animal products have a high environmental impact, vegans with their excessive reliance on processed substitutes for meat and dairy don’t necessarily show a significantly smaller carbon footprint. Besides bland purely vegan dishes are not half as fortifying or fulfilling as meat based cuisine which leads to a higher food intake which in turn defeats the purpose, herbivores keep harping about. It is why experts feel an ovo – vegetarian or flexitarian diet is more likely to produce environmental benefits.
I am not advocating indiscriminate consumption but it is easier to make healthier choices when one is not pressured or forced into it. After all, you are what you eat, and if your dietary decisions make you smug, sanctimonious and superior, perhaps a change in the menu might be in order.

Posted by Anuja Chandramouli at 8:06 AM No comments:

A CHILLING BLAST FROM THE PAST

Benjamin Kingsbury’s An Imperial Disaster: The Bengal Cyclone of 1876 is about a natural disaster of near apocalyptic proportions which claimed 215,000 lives by drowning and at least another 100,000 lost to cholera and famine. While the extreme forces of nature that led to this catastrophe are meticulously documented, Kingsbury insists and rightfully so, on placing the focus on the ‘all – too human patterns of exploitation and inequality – by divisions within Bengali society, and by the great disparities of political and economic power that characterised British rule in India’ that shaped this natural disaster which exacerbated a horrendous situation to inhuman levels of suffering and loss of life. 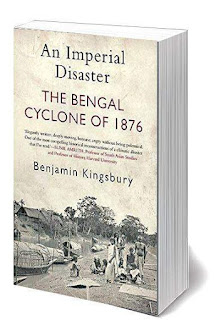 Told with an unflinching and unsparing gaze, Kingsbury’s comprehensive and compelling account serves the dual purpose of transporting the reader back to the horrors of imperial rule with its callous disregard for the natives, particularly the poor, while holding a mirror to problems such as ‘overpopulation, unemployment, landlessness, corruption, illiteracy, indebtedness, official indifference’ which though prevalent during British rule, remain rampant to this very day. This narrative is scathing in its condemnation of ruthless colonial greed pointing out how the people of India were left impoverished, with their manufacturers and industrialists systematically driven out of business, farmers and peasants buckling under the weight of taxation, and a massive chunk of revenue being siphoned away to England.
It also shines a light on the stunning indifference of the authorities towards the victims who having suffered untold losses were left to fend for themselves even as cholera and famine continued to take a toll. The higher ups among the imperial powers made it clear that the more niggardly and pecuniary the efforts expended on relief works, the higher the opportunity for career advancement would be. In fact, relief officers were appointed solely ‘to prove that there was no need for relief.’ In the meantime, officials saw fit to spend beaucoup sums on imperial durbars, feasting, fireworks and idle festivities.
The great majority of the public were uncaring too, not bothering to lift a finger to help fellow Indians. Regional publications like the Amrita Bazar Patrika, rued the callousness of the professional, landowning classes who were ignoring the disaster, refusing to help raise money or donate for a cause. Greed and corruption were not limited to the British alone and the landlords and middlemen saw no reason not to refrain from enriching themselves at the expense of the others. Worse, no preventive measures were implemented in the aftermath.
A brilliant read, this book should be mandatory reading for Indians just so they can learn from the past, wise up in the present and prevent the future from being reduced to a disaster waiting to happen.

Posted by Anuja Chandramouli at 7:55 AM 9 comments: