Festering Wounds and a Fractured Identity

Operation Bluestar, was authorized by Indira Gandhi in June, 1984 to clear the militants led by Bhindranwale and his armed supporters who had taken up residence in Amritsar’s famed Golden Temple, the Sikhs’ holiest shrine. The deadly military action which left thousands dead dealt a crippling blow to secessionists fighting for a free Khalistan and the national media at the time was full of praise for Ms. Gandhi. Some felt that this tragedy could have been avoided if the PM had used diplomatic means to reach an accord with the moderate leaders of the Akali Dal especially since some of their demands were considered reasonable.Matters came to a head when Indira Gandhi was assassinated by two of her own Sikh bodyguards, five months after the ill – fated operation. National fury over her death and Rajiv Gandhi’s call for a pogrom resulted in anti – Sikh riots and genocidal violence against the community. 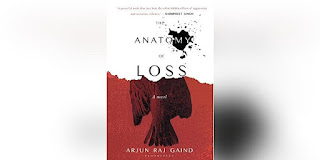 The Anatomy of Loss by Arjun Raj Gaind unfolds across a sea of suffering as heinous brutality is deliberately perpetrated against the Sikh community. Interestingly, the author chooses not to dwell on the political/ ideological nitty gritty that contributed to the tumultuous events of 1984. Rather, his is a deeply personal narrative based on real events that intimately examine the long-lasting emotional ramifications bred from a toxic miasma of hatred, intolerance, rage, and an unwillingness to forgive or forget a tragedy.

Haunted by his past, the protagonist, Himmat whose childhood is lost forever in the vicious upheaval brought on by a political assassination, is unable to move on. He was only eight years old and in the middle of an idyllic vacation with his maternal grandparents in their farmhouse when the shocking news reaches them. The ramifications are swift and shocking. Gobind, his beloved grandfather, a poet and professor shaves off his beard of which he is inordinately proud to try and disguise his identity, revealing himself to the little boy not as the vaunted hero he has looked up to but a very human and frail old man. That very night, Gobind’s best friend seeks his help to save his son, only a few years older than Himmat, who has been taken into police custody. Out of concern for his own family Gobind refuses. He changes his mind in the morning, but his intervention ensures he is taken into custody himself, beaten and tortured, despite his advanced years. Though his brave wife manages to free him, his effort is in vain, and Gobind earns himself the implacable wrath of a senior Inspector.

Anxious to protect Himmat, Gobind decides to leave Amritsar with his family. In his single – minded quest, he makes the decision not to intervene even as a great injustice is being played out before their very eyes, though Himmat begs him to help. This horrifying incident is the final straw that breaks the weakening bond between the two of them leaving Himmat feeling adrift from all he has ever known and cut off from his own identity.

Himmat is a finely etched character, whose raw and bleeding psyche is laid bare and exposed to the minute scrutiny of the reader to disconcerting effect. The constantly festering agony of one who has been unceremoniously exposed to the ugliest side of human nature is in no small part due to the crimes of the past, when the Sikhs were repeatedly persecuted in Mughal, British and Independent India. Through his protagonist, the author draws attention to suppurating wounds left on the collective psyche by unspeakable tragedy and the long-term damage done, when the embers of anger and despair are constantly stoked by self – serving politicians that perpetuates the cycle of hate leaving no room for healing. Yet, Gaind also suggests that there is always hope thanks to the resilience of the human spirit.

An incredibly affecting book, narrated with heartbreaking candor and deeply felt emotion, it is hard to put down. Gaind does a fine job of reconstructing personal trauma. Himmat moves to London and tries to drown his pain and impotent frustration in booze, chiromania and is even recruited by disgruntled youngsters like himself who still believe in the dream of Khalistan. But no amount of self – destructive behavior brings him closer to elusive peace or much needed closure until he is able to reach deep within, with only a little spectral help to find the strength to forgive and fully become the man with the heart of a lion, he was always impossibly close to being.

An edited version of this review appeared in The New Indian Express. You can read it here.

Posted by Anuja Chandramouli at 6:04 PM No comments: