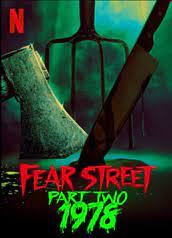 Was there ever a horror movie prequel/sequel that was ever worth a damn? Fear Street Part Two tries hard, it really does, but nothing really sticks. The axe-swinging murderous puppet type controlled by the witch, Sarah Fier whose curse has haunted Shadyside for centuries supplies the gruesome thrills and chills in Camp Nightwing which was alluded to in Part One. Ruby Lane (who sings a sweet little song while wielding her knife) and Billy Barker (A little boy who bashes heads in with a baseball bat) make an appearance too. This set – up harkens back to Camp Crystal Lake and the terrifying Jason of Friday the 13th fame so one mentally prepares oneself for happy little campers getting slaughtered and also wonders how parents still send their kids to these places were the counselors are either high or preoccupied with getting laid with their young charges being the last things on their minds!

There is a little more backstory about the witch and the emotional beats are supposed to be supplied via a soured relationship between two sisters who have diametrically opposing views about how best to handle being stuck in an accursed place and yet another messed up relationship between former friends. They resolve their differences while being hunted by one of the witch’s minions, watching their friends and charges hastened to horrendous ends and screaming fit to bust their lungs. None of it works though. This time around, the director Leigh Janiak, ramps up the bleakness and darkness which seeks to drive the horror quotient through the roof but since the film is nothing but a set up for a major reveal in part three, most of it is repetitive and the schtick gets old.

And a pet peeve is the continued tendency to portray witches in the worst possible light never mind that the infamous witch hunts which spanned centuries and claimed the lives of thousands of innocent women whose only crime was that they didn’t stand and pee was one of the darkest chapters in history. It is so tiresome that this tired old trope of the wicked witch is still being mined to create loathsome women characters. But hopefully, in the spirit of wokeness which seems to be the driving force behind art these days, part three will turn things on its head and reveal that the witch is not the real villain of the piece but a victim who has slaved across the centuries to save Shadysiders from the same malevolent creature that claimed her life and unleashed a brood of mass murderers. Now wouldn’t that be something?

Posted by Anuja Chandramouli at 9:56 AM