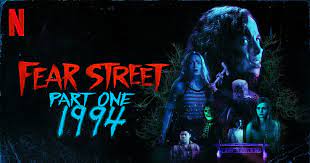 It was only a matter of time before the back storied world – building and myth - making that powered one too many money – minting superhero franchise seeped into the horror genre. We saw glimpses of it in the Conjuring and Insidious universe which has been yielding increasingly diminished returns to begin with and now, Leigh Janiak has upped the ante with her offering of three movies based on R.L Stine’s series, “Fear Street”, spanning centuries, to be dropped in installments over the course of a month on Netflix. The film is not a faithful adaptation and is a much darker take on R.L. Stine’s work which was written for children and therefore does not feature the body count, blood and gore that are prerequisites for a slasher flick. In fact, his books were once famously described as a ‘literary training bra’ for Stephen King.

“Fear Street Part One: 1994” is set in Shadyside aka Shittyside. The town has an unfortunate history of ordinary people suddenly losing all their marbles and going on killing sprees. This is exactly the sort of thing that can give a place a bad rap and lead to plummeting property value, plunging the citizenry into poverty.  Their problems are compounded when the film opens with yet another Shittyside massacre in a mall and the people have to cope with the scale of the tragedy even as the media highlights similar gruesome incidents from the past contrasting the town with the neighboring Sunnyvale, which is picture perfect and prosperous to boot. Naturally, they tend to look down on Shadysiders, going so far as to blame them for their perpetual wretchedness.

Deena (Kiana Madeira) has just put together a bitter mixed tape for her ex, Sam (Olivia Welch) who has moved to Sunnyvale and is not inclined to buy into theories that a witch named Sarah Fier has placed a curse on the town making it a breeding ground for serial killers who go about the business of slaughter in wildly creative and surpassingly gruesome ways. Deena’s brother (Benjamin Flores Jr.) is a bit of a nerd who has made it his business to study the legend of the witch. Her friends Kate (Julia Rehwald) and Simon (Fred Hechinger) are selling pills to their school mates in a determined effort to pick themselves up by the bootstraps and better their lives. On an eventful night, Sam accidentally disturbs the grave of the witch and paints a bullseye on her back, dragging this oddball group of friends into a night of mayhem and murder.

Janiak treats these characters with respect and it is why we come to care for them though they can be abrasive and unlikeable on occasion. They make a lot of bad decisions but they are not blamed or shamed for it, because the film understands the brashness and desperation of youngsters who are heartily sick of adults, unwilling to take the time to listen to their fantastical claims, wrapped up as they are in their own worlds. Fittingly enough, the adults barring a few exceptions are mostly absent. Even the burgeoning sexuality of these characters is not treated as something to be used for purposes of titillation or as a cautionary tale. This sensitivity is not common in this particular genre and makes for a refreshing change of pace.

“Fear Street Part One: 1994” is high on nostalgia, the occasional jump scare and boasts of a rousing score but it is hardly the most frightening film out there even though parts of it are truly disturbing and make you feel a little queasy. Even so, it is interesting enough to make you want to come back for the second installment.

Posted by Anuja Chandramouli at 9:03 PM