Horror for the Head and Heart

A searing look into the bare bones of a dysfunctional marriage, played out against the backdrop of encroaching madness, Kiran Manral’s “Missing Presumed Dead” makes for a troubling read. The author is too smart a storyteller to provide convenient or contrived answers to the questions that pile up with dizzying momentum. Yet the reader is not left hanging or frustrated. It is a satisfying yarn that is meaty, evocative and likely to keep you mulling over it, long after the last page has been reluctantly turned. Manral knows how to give her readers what they want while leaving them asking for more. 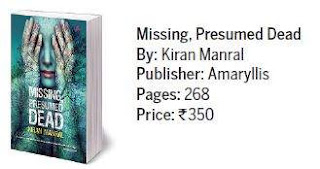 Aisha Thakur finds herself in the unenviable position of being fully aware that her marriage is dead but decides to stick to the corpse no thanks to the recalcitrant remnants of a once powerful passion that refuses to kick the bucket. And of course, there are tedious things like duty and parental obligations to her son and daughter to be considered. If that were not bad enough, Aisha lives in constant terror knowing that the lurking chemicals in her cranium may unloose the same demons that claimed her mother’s life which if left unchecked will take her and everything she loves and once loved as well. Then a stranger shows up at her remote mountain abode in the middle of a vile storm, claiming to be her half – sister, and suddenly Aisha life stands poised to take the plunge into the doom that was inevitably going to be her lot.
The protagonist’s long drawn out defeat to the monsters both within and without plays out painfully and with profound pathos, leaving the reader sick to death with anxiety and fighting back tears at various junctures during the course of her downward spiral. Aisha’s innate insecurity and vulnerability are exacerbated by both her condition as well as circumstances. Prithvi, her better half originally comes across as a bit of a cad with rage issues and designs on her ancestral property but by choosing to tell his side of the story as well, Manral casts him in a more sympathetic light. The harsh truth is that even the best of us are ill – equipped to deal with disability and for flawed souls just trying to get by, it can turn out to be the wrecking ball that leaves nothing but devastation in its wake.
In the end, Aisha as well as Prithvi are sitting ducks for predators who seek to prey on the weaknesses of others, having zeroed in on the scent of blood. Having made her way into town on an errand, Aisha is trapped in more ways than one and is left to the mercy of a charming stranger who offers her hospitality and a way out for better or worse. It is hardly surprising that she takes him up on the offer, given that she holds her wellbeing so cheap. Therein lies the true horror in this moving saga that will leave your head and heart reeling.

Posted by Anuja Chandramouli at 7:07 AM No comments:

AN INEXPERT REACTION TO MOMENTOUS MATTERS 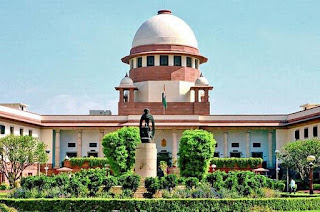 Forget Vicky Kaushal, everybody seems to be crushing on the Supreme Court nowadays thanks to landmark judgements which will no doubt have a major impact on the great Indian future. Some of us who don’t believe in invoking love laws made famous by Arundhati Roy which dictate who should be loved, how and how much had barely recovered from the happiness engendered by the verdict decriminalising homosexuality when the Men in Black Robes put the pedal to the metal and authenticated aadhar with a few caveats, ruled that adultery is not a crime and women of all ages irrespective of their menstruating age must not be denied entry into Sabarimala. People considered smarter than me on account of being actual experts have written at length on the significance of these monumental matters, but that is hardly reason enough to keep my opinions to myself is it?

While it is nice of the Supreme Court to uphold the noble principles of democracy that our freedom fighter ancestors fought and died for, the battle is far from over. After all, as citizens we have seldom felt obliged to honour either the letter or the spirit of the law and every one of us is guilty of a range of minor and major offenses ranging from bribery, traffic violations, littering, discriminating on the basis of caste, colour, gender or if you are a Bollywood star, stashing weapons for terrorists, killing endangered species, running over pavement dwellers and getting away with it not entirely  scot-free since concerned officials have to be paid off first.

Therefore, it is one thing to declare that it is okay to be LGBTQ by the highest judicial authority in the land but entirely another for a dude to be able to openly date another dude or a transgendered person to run either for public office or represent India at the Olympics. Even the celebs don’t seem to be in a tearing hurry to come out of the closet as yet. And you can hardly blame them, after all this is the land where anti – Romeo squads run rampant and straight couples who marry outside of their caste are hounded or murdered in broad daylight even as the guardians of the law turn a blind eye to the plight of victims.

It cannot be denied that steps have been taken in the right direction with regard to women’s rights. But of course, there is a but... It is all well and good for the wise men to declare that “husband is not the master of the wife” or “To treat women as children of a lesser god is to blink at the constitution itself” but make no mistake words are wind without proper action to back them up. Dowry harassment, rape, trafficking of little girls, workplace abuse, stalking are very real evils plaguing women that aren’t just going to disappear in a puff of smoke, just because women can now visit a famous temple in Kerala.

We need to work harder than ever before if the daughters as well as sons of India, irrespective of their sexual orientation and feelings towards Aadhar are to feel safe and cherished. Otherwise, even the Supreme Court is just a toothless tiger.


This article was originally carried by The New Indian Express.
Posted by Anuja Chandramouli at 9:43 PM No comments: