The naysayers and prophets of doom would have you believe that printed books are an endangered species, e-books are a fad that won’t last, newspapers and magazines will be merged with toilet paper manufacturers in hostile takeovers and reading itself is a dying pastime. Fortunately for lovers of the written word, I can confidently assert that this is a load of alarmist crock and there is no need for wordsmiths to kill themselves just yet.
Studies conducted by myself, with scant regard for methodology, statistics, analysis etcetera, thereby being entirely bereft of scientific merit have revealed that there are readers out there who wade through pages and pages while munching on crunchy apples or crunchier chips (depending on their waistline) and have every intention of doing so till the end of their days. That is the good news. Now for the bad.
Contrary to what a certain gung ho commercial for an online shopping website would have you believe about the great multitudes out there who read from dawn to dusk, there are not quite as many readers out there as authors would like, to ensure the fulfilment of their wildest get rich fantasies. The sad truth is that people would rather shell out beaucoup bucks for fairness creams, pet Jacuzzis, fancy sports cars and boob jobs rather than a reasonably priced book or even one that is being sold at an indecently discounted rate.
This can be amended using a few simple but insanely effective measures recommended by the brains behind the aforementioned unscientific research:
Forbidden Fruit
Instead of begging their kids to pick up a book in the hope that they will actually learn something, parents would do well to expressly forbid reading under their roofs. And that goes double for textbooks. And as quickly as that, books will acquire the lustre of uninterrupted time with the TV/Ipad or Sapphic erotica and inspire similar passion with the end result that the youngster will never have enough of books for the rest of his or her natural life. Mission accomplished, thank you very much!
Embrace Cutting – Edge Technology
It is time the print vs e – book factions put their differences behind them to make common cause against the enemy. By pooling resources they can hire the geniuses who come up with sexy gadgets to knock themselves out trying to invent XBooks that give the reader facials, botox treatments, help them burn fat and plug the hole in the ozone layer even as they immerse themselves in the plot. With a product like this Smartphones can suck it!
Have Faith


Like dogs and diamonds, books are our best friends and are forever. Believe in the magic of stories and they will never die.

From my fortnightly column for The New Indian Express, FOR CRYING OUT LOUD! which originally appeared here.
Posted by Anuja Chandramouli at 9:55 AM No comments:

FOR CRYING OUT LOUD!

So here it is! My brand new fortnightly column for The New Indian Express. :)

CONGRATULATIONS PINTO FOR EM AND A BIG BOO TO US! 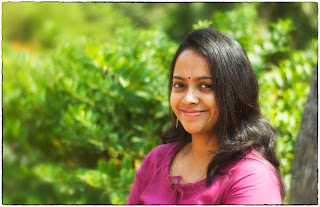 Renowned author, Jerry Pinto has bagged himself a biggie – Yale University’s $150,000 Windham – Campbell Prize for his ground-breaking debut novel, Em and the Big Hoom. An impressive feat which has the desi literary community applauding him on every social networking platform there is and rightfully so. It is always heartening to see home-grown talent celebrated on a global scale.
Having nobly fought off waves of bitter envy that saw me angrily remonstrating with the powers that govern the universe, “Why God, why? This is so unfair… How come bloody Yale noticed Jerry Pinto and not me?” and so on, I moved on gracefully to read what the Windham – Campbell Prize winner had to say for himself.
Pinto was magnanimous and humble in victory making it a point to stress that the prize was not the result of individual genius but “…many forces and factors that conspired in the most wonderful way to bring me here.” It has to be admitted that the man is really sweet in addition to being prodigiously talented and deserved the win.

He goes on to say that the prize left him gobsmacked because, “When one writes literary fiction one knows it is not going to sell a tremendous amount…” Now that is a munch - worthy point and entirely heart-breaking, simply because it is the hard truth that paints a dismal picture of our country and its readers. Why is it that we have trouble celebrating or even identifying the best and brightest minds here?
It is not as if this is the first time Pinto has received recognition for his work. Previously, he won the Hindu Literary Prize as well as the Crossword Book Award, but even so, it is highly unlikely that these translated into massive book sales and got him anything more than hearty backslapping in a limited circle whereas Salman Rushdie, Arundhati Roy, Aravind Adiga, Kiran Desai and the rest of the Booker Prize winning brigade command so much more respect here. Now my grouse is not with the aforementioned literary heavy weights who deserve all the plaudits they have won but the fact that we refuse to take anyone in any field barring cricket seriously unless they have been endorsed and feted by the West. It is scary that we are so accustomed to mediocrity that we no longer have what it takes to nurture brilliance.
On the one hand we have critics dipping their quills in acid every time a certain universally reviled and envied bestselling author comes out with a novel because a sesquipedalian he is not and on the other, most authors with a penchant for polysyllabic propensity are told to dumb it down because the average ADHD afflicted Indian reader can’t be bothered with grandiloquent prose. Naturally this explains why Indian writing has been unable to find the sweet spot between readable swill and unreadable brilliance.
It is to be hoped that Jerry Pinto’s big win will inspire reader and author alike to take it up a notch and be pursuers of literary excellence. On that note, here’s hoping the Pulitzer Prize Committee is smitten with my brilliant column otherwise the only people who are going to be enriched by its scintillating points are my editor and Dad!

An edited version of this piece was published in TNIE and you can read it here.

Posted by Anuja Chandramouli at 9:08 PM No comments:

A Review to Make the Heart Hum and A Tip for Making Mahashivaratri Special!

This is what Lyn, one of the #22 best reviewers on Goodreads, had to say about my SHAKTI: The Divine Feminine :)

As a man reading this, and a Western man at that, I had to open my mind to ideas I had only a prior flirting awareness. Chandamouli has crafted this as a theological, spiritual narrative and I was reminded of Norman Mailer’s evocativeAncient Evenings, his historical fictional treatise on Egyptian mythology. Chandamouli explores Indian and Hindu myth with a fresh eye for detail and a storyteller’s talent. 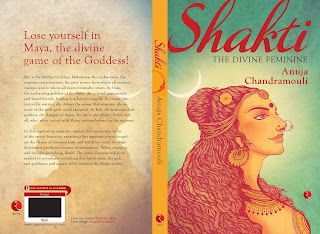 The author has researched her subject well and this novel is a wealth of information. But more than just an encyclopedia of Hindu knowledge, Chandamouli is a talented writer and makes this story come alive. Like Mailer’s Egyptian story, Chandamouli creates a historic depth for the pantheon and the reader is guided on a tour of the religion. The author tells of legends within legends and adds specificity to her design.

You can read the rest here. 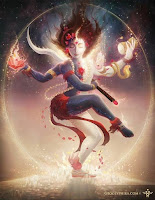 Also, this MahaShivaratri (March 7th), draw closer to SHIVA with SHAKTI! Be sure to pick up a copy at one of the links below!
Amazon India
Flipkart
Kindle
Posted by Anuja Chandramouli at 2:22 AM 1 comment:

POETIC PROMISE OF A LOST TALE 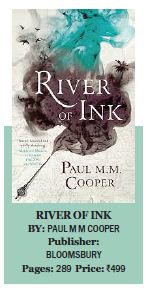 Paul M.M Cooper’s River of Ink, is the tale of reluctant revolutionary – a poet who believes that poetry makes nothing happen. Asanka is the court poet of King Parakrama and was enjoying the high life when the ruthless Kalinga Magha, usurps the throne of Lanka, and sends his existence plummeting into a world of endless turmoil. Forced to accept the tyrant’s order to translate a Sanskrit text on Shishupal, into Tamil (a dubious decision, given the bloody history between the Tamils and Sinhalese which is scarcely touched upon) he discovers that words do have power and may just triumph where the sword has failed.
It is a potent premise. Yet, it falls well shy of delivering the goods. Perhaps, it is because while Cooper is clearly earnest and sincere in his attempt to chronicle a slice of Sri Lankan history, his alien sensibility constantly jars in the otherwise colourful narrative he has almost brought to life.
For instance, it is hard to buy the typically thankless character of the wife, Madhusha who just refuses to be understanding while her husband is carrying on with a comely maid. She walks out on Asanka, helping herself to his money and leaving a curt note. I did not believe it for a second.
Women of that era, used to the perks of a cushy life, did not usually go traipsing off into the surrounding war – torn country in a huff, like the feisty belles so admired in contemporary times with their husband’s money unless they had an especial desire to be gang – raped and murdered. Besides, Madhusha was a country mouse with no taste for life in the capital city of Polonnaruwa. It seems highly unlikely that she would know how to write.
Kalinga Magha is equally problematic since the author seems keen to portray him as a savage with a poet’s soul. A Genghis Khan meets Oscar Wilde if you will. When he is not lopping off heads, gouging out eyes, and supressing rebels with an iron fist, the tyrant is keen on promoting his brand of art and indulging his appetite for pretty young things. Which is why it hardly makes sense that he would want to marry the lowly maid sans the maidenhood, the very same one, Asanka is so passionately in love with, instead of ordering her into his bed. This sort of thing makes it all seem hopelessly contrived.
Cooper has clearly done some research but in the chapter on Yudhisthira, there is an error. It is written that the grand horse sacrifice was conducted after twelve years spent in exile, the unhappy result of a lost game of dice to the trickster, Shakuni. In Vyasa’s epic though, the Pandavas went into hiding after Duryodhana’s attempt to burn them alive at Varanavata. The horse sacrifice is performed only after the Pandavas are spotted at Draupadi’s swayamvara and given five small villages to start afresh. The infamous game of dice and exile came after.


In this fashion, The River of Ink, meanders on along its improbable course while clumsily setting up a twist that the discerning reader can follow through to its conclusion, almost at the moment of its introduction. A valiant if disappointing effort from Cooper.

This review originally appeared in The New Indian Express which you can read here.
Posted by Anuja Chandramouli at 1:39 AM 2 comments: