The Bold and Beautiful Begum 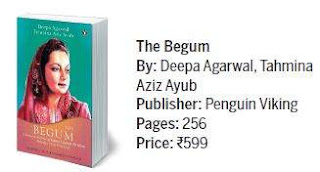 Begum Ra’ana Liaquat Ali Khan, wife of Pakistan’s first Prime Minister, was one of the key players in an age when history was being made. She witnessed first-hand the birth of a nation, carved out of the sacrifice of those who fell during the partition, the darkest chapter in the history of both India and Pakistan, the horror and aftershock of which continues to reverberate across the subcontinent. The ‘Dynamo in Silk’ who rolled up the sleeves of her elegant gharara to help fulfil the vision of her husband and his dear friend, Muhammad Ali Jinnah left behind a remarkable legacy that championed feminism and selfless service. It is one that deserves to be celebrated and held up as a shining example of grace in the midst of all things grotesque. It is a matter of almost criminal negligence on the part of historians that a complete and detailed biography of her extraordinary life did not exist before the intrepid duo of Deepa Agarwal and Tahmina Aziz Ayub came together to put together this beautiful labour of love – The Begum: A Portrait of Ra’ana Liaquat Ali Khan, Pakistan’s Pioneering First Lady.
Born Irene Margaret Pant in remote Kumaon, her family was yet to recover from the outrage generated over their conversion a generation ago and were dealing with the overt hostility of the Brahmin community. As a bold, intelligent and enterprising young woman, she was teaching economics in a Delhi college, when she was drawn into the politics of the day and met the man she was destined to marry and the one who would prompt her to change her religion for love. Married in 1933, the dashing young couple threw themselves into the working of the Muslim League.
The newlyweds played a pivotal role in persuading Jinnah who had distanced himself from the party and moved to London to come back and take up the mantle of leadership and represent the rights of Muslims whom it was felt wouldn’t be treated fairly in a unified India. Unfortunately, given the many lives that were lost in the bloodbath that was the partition, Jinnah paid heed and this particular reviewer couldn’t help but wish that the Begum had persuaded the Nawabzade to take her to Bora Bora instead for their honeymoon!
In 1947, Ra’ana left for Pakistan. Her efforts in setting up relief camps to provide succour to the many who were deprived of their loved ones and all their worldly possessions has rightly been commended.  Jinnah died shortly after these tumultuous events and tragically, Liaquat Ali Khan fell to an assassin’s bullet in 1951 and only the Begum remained. As an active player in the political sphere, one of Ra’ana’s most noteworthy achievements was the establishment of the All Pakistan Women’s Association (APWA) in 1949 which went on to benefit millions and continues to play a crucial role in the fight for the emancipation of women in a land where personal freedom has often been sacrificed on the altar of rigid religious dogma.
She made her indomitable presence felt in the fields of education and social service as well. Ra’ana was also her country’s first ambassador to Netherlands, Italy and Tunisia in addition to serving as the Governor of Sind. She won the Human Rights Award of the United Nations and many more in recognition of her exemplary work.
Told in two parts, Deepa Agarwal handles the early part of her life leading up to the partition and Tahmina Aziz Ayub outlines the latter half of her life in Pakistan. Both provide an intimate glimpse into the heart and mind of a legend. In the Begum’s own words, ‘Pakistan was visualized as secular and democratic. Today Pakistan is out and out a theocracy and under that garb, every vestige of personal freedom is snatched away.’ Like her we too can’t help but wish that it had all been otherwise.


This book review was originally published in The Sunday Standard.
Posted by Anuja Chandramouli at 12:47 PM

If you’ve ever experienced the pain of an emotionally dead relationship or if you’ve ever had a man suddenly pull away and shut you out...

Then what you’re about to find out will completely change the way men treat you and even how YOU experience relationships.

Because at the end of the day, men secretly want just one thing.

And once you understand this one crucial craving that men have…

In fact, this one secret male obsession is the biggest key to being truly irresistible to a man... in a way that goes far beyond physical attraction.

And when you know it, you’ll never struggle to keep a man interested or connected on a deep emotional level the way most women do.

Thousands of women who discovered this one male desire have used it to turn hopeless situations into the life fulfilling relationships they always dreamed of.

The kind of loving companionship and exciting romance that you deserve.

Then click the link below and watch the free version while it’s still up:

==>Next time your man shuts you out do this

You’ll be glad you did.